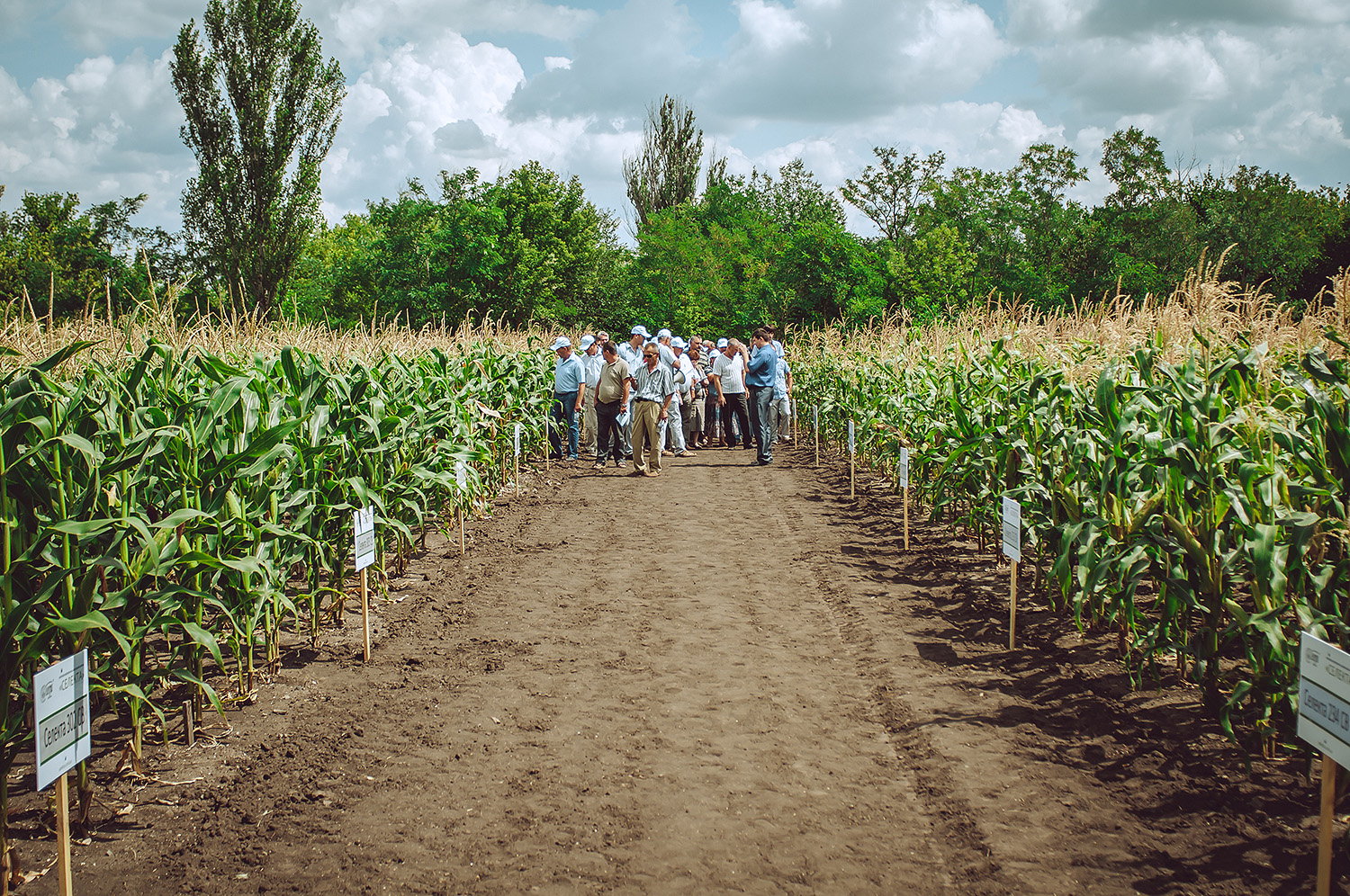 The company “Selekta” has been successfully operating in the market of Ukraine and Belorussia for 16 years. The founders of this enterprise are scientists who have passed a serious scientific school in the former All-Union Research Institute of Maize (now the Institute of Agriculture of the Steppe Zone of the National Academy of Sciences of Ukraine).
They have extensive experience in selection studies and trials of this culture. Vladimir Fyodorovich Moskalenko – the Director of LLC Scientific and Production Commercial Firm “Selekta”, and Vitalii Yakovlevich Melnik – the Leading breeder. In tandem, these scientist – breeders have achieved significant achievements in the creation of highly productive maize hybrids, well adapted to extreme growing conditions, with low harvesting moisture of grain and valuable economic qualities.

So, the representative of the delegation from the Republic of Belorussia who took part in the Day of Field, the Chief specialist of the seed production department of the Republican Association “Belsemena” in the Gomel region, M.I. Fedorovich noted that 50% of the areas of maize in his country is sown with hybrids created by the Company “Selekta”. Between the Belorussian agrarians and LLC Scientific and Production Commercial Firm “Selekta” for many years there is the close and fruitful cooperation.
And the General director of Company “Elita” (city of Belgorod, Russia) A.V. Smyk said that their company actively cooperates with our breeders to transfer the best samples of Ukrainian selection to the State network of the Russian Federation for testing and zoning, and in the future for inclusion in the State Register of Russia.
Vladimir Moskalenko, the Director of Company “Selekta”, noted that the goal of plant breeders is to create new maize hybrids for areas with problematic climatic conditions. This work is carried out jointly with the leading breeding enterprises of Ukraine, Russia and Belorussia.
For 16 years of painstaking work, have been created more than twenty hybrids of a new generation of various ripening groups, which have a high potential for productivity, which are not inferior to hybrids of foreign selection, and in terms of the convenience of seed production, resistance to unfavorable growing conditions often exceeds them. They are characterized by: high yield, quick moisture return, resistance to diseases and stressful environmental conditions and many other properties.

“According to the State Strain Testing,” emphasized Vladimir Fyodorovich, the yield of hybrids created in our company is from 80 to 200 centners per hectare.”
During the existence of the company 7 hybrids were introduced to the State Register of the Ukraine, three hybrids are currently undergoing state strain testing, and 7 hybrids were added to the State Register of the Republic of Belorussia.
The agrarians who participated in the Day of Field, cooperating with the Company “Selekta” for many years, are especially honored by the hybrids of MOS 182 SV, MEL 272 MV, Lyuvena, Poltava and others.
“The main direction of the selection work of Company “Selekta”,” said Vitalii Yakovlevich Melnik, is the creation of drought-resistant hybrids, adapted to the new climatic conditions that have been observed in recent years.”
Firm “Selekta” has all the necessary conditions for growing and full cycle of processing of high quality corn seeds. Annually the company delivers to the market 200 t of parental forms of hybrids and 800 t of seeds of the first generation. Addressing the participants of the Day of Field, Vladimir Fyodorovich Moskalenko said: “We are aimed at long-term mutually beneficial cooperation with interested enterprises, so it is important for us that our customers receive high-quality corn seeds, grow a high yield and have big profits.”
Everyone with whom they had to communicate at the Day of Field, unanimously declared that the LLC Scientific and Production Commercial Firm “Selekta”, is a reliable and conscientious partner. Such partner that helps to develop the economy and improve business, because the real income that the land gives depends on the fate of each agricultural enterprise.
And cooperation with the LLC Scientific and Production Commercial Firm “Selekta” always guarantees success.